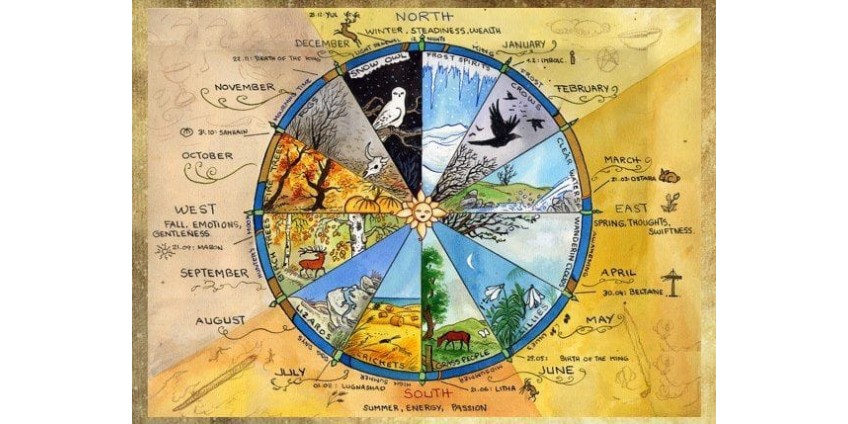 Posted By: 1 Published: 08/02/2019 Comments: 0
One of the greatest summer pleasures of my youth was taking a drive with my parents and brother through the August countryside, stopping for fresh produce the farm families sold at the roadside for what seemed like spare change. Produce on the vine in the morning came fresh to the table in the evening. Nothing else tastes quite so sweet as that first taste of the first harvest from the fields of your homeland.

When I first began doing research for the book that would become The Sabbats: A Witch's Approach to Living the Old Ways, I was astounded to discover that both the autumnal equinox as well as what we now call the first of August have been celebrated as festival days of the harvest season across Europe and in North America. Community corn shucking, Harvest Home feasts, and even the American and Canadian Thanksgiving celebrations arose from the Pagan traditions of the harvesting times.

The first cultivation of food plants, or what we think of as farming, came into being about twelve thousand years ago. The ability to grow food products had a dramatic impact on the human way of life. Farming meant clans and tribes could settle in one area, creating communities and commerce. Rather than living a nomadic life of stalking herds of edible animals, people could settle in one place and venture out of their growing communities to forage only when hunting and the gathering of non-farm plants were needed

These settled communities grew fast. Our ancestors discovered that this was an excellent arrangement for raising children, teaching survival skills, sharing work, and—most importantly—sharing food during the long winter months.

On the first or second day of August, Pagans and other rural people celebrate the harvest of the first grains; they have a variety of names for this festival. The most common in the English speaking west are Lammas and Lughnasadh. Lammas literally means "the mass of the loaf [of bread]. Lughnasa(dh) is Irish for the month of August, but many etymologists believe the word originally meant "Lugh's wedding." Lugh was a solar and fire deity, and Lughnasadh linked his Godly attributes to the archetype of mother earth's harvest bounty.

Native Americans in eastern North America celebrated the Festival of the Green Corn as a grain festival in honor of the Corn Grandmother. In ancient Rome, the first harvest was known as Ceresalia, named for grain Goddess Ceres, from whose name the English "cereal" is derived.

Many traditions from ancient celebrations have been preserved. Making small dolls or poppet out of dried grain is a common practice even now in the twenty-first century. These are kept as talismans of the harvest, treated like sacred objects, and then are usually burned when the winter and the risk of starvation has passed.

Mabon is the second harvest festival, and it falls on the Autumnal Equinox. The sabbat is named for Mabon, the Welsh God who symbolized the male fertilizing principle in the Arthurian myths. Some mythologists equate him as the male counterpart to Persephone, while others believe his attachment to the equinox to be a relatively modern addition to the Pagan wheel of the year.

Mabon marks the harvesting of tree and vine fruits—particularly the apple and berries—many of which are sacred to various deities of Western Europe. As with Lammas, communal feasting and offerings of sacrifice to patron deities is a part of the festivities.

For your own harvest rituals, any grains, apples, berries, or other fruit from vines are appropriate both as decorations and offerings, and also for use in communal feasting. Many varieties of grapes are harvested in September, and festivals to honor wine deities (such as Rome's Dionysus) were common autumn celebrations. In China September marked the end of the rice harvest, and in Jewish communities now, as in the past, they celebrate Succoth, a harvest holiday with pagan roots. This is observed by building a temporary outdoor dwelling decorated with fall vegetables and in which all meals are to be eaten for the full eight days of the sacred holiday.

Burial cairns, barrows, catacombs, and other cemeteries were feared by many of our ancestors, seen as places where evil spirits lingered. Approaching such places at Mabon was deemed safe because it was believed that the balance of light and dark would act like an equilateral cross and offer protection from any negative spirits attracted to the graveyards. Fires were lit at the cairns or carried inside hollowed-out native gourds similar to our Jack o' Lanterns.

I have been fortunate to attend many harvest sabbat festivals with Pagan organizations, festivals, within my own coven, and to be a guest at other covens' events. I am always flattered to hear my blueprints for sabbat rituals being used, the ones I wrote for both solitary and coven work in Sabbats. Everyone who has used them has enhanced their ritual by honing them to their own group's needs and tastes. Every ritual has been beautiful and powerful; as Paganism continues to grow and grow up, we realize that the power in words is potent and that the more closely those words can be tied to us, the more beautiful and powerful they become.

One old song, taken from Christian hymnals and often sung in autumn is "Come, Ye Thankful People, Come." The original words, written in the mid-nineteenth century by George J. Elvey, need very little modification to have a profound meaning for Pagan harvest celebrations. Here is my version of an old and cherished hymn that is now always a part of my harvest rites:

All the earth is her own field,
Fruit unto her praises yield.
Wheat and corn together sown,
Unto joy or sorrow grown.
First the blade and then the ear,
Then the full corn does appear,
God and Goddess grant that we
Whole and pure as grain shall be.

Anyone with access to a Christian hymnal will find lots of powerful expressions of the power of the earth's Gods and Goddess within their pages. You will be surprised by how little change it takes to make the words of the old hymns meaningful for Pagans. After all, when our Christian ancestors sang "Bringing in the Sheave," they were merely following a centuries-old custom created by our common Pagan ancestor, that of singing in the harvest.

Just as Native Americans and British colonists joined together in a feast of thanks to the deities who sustained their lives, we can also share this universal theme of the Harvest Home with others. We are all dependent upon the same food sources, and keeping the rites of sowing and reaping is essential to the survival of all of us.